After the Museum I went to Niokastro (new castle) which wasn’t closed for conservation, or closed because of any danger. It was in fact, open! Of course it’s not old enough for my preference, having been built in the 1500’s under the Ottoman empire, then upgraded by the Venetians, but it was still quite fun. The picturesque old walls of the town, which led up to the castle, run alongside the road. 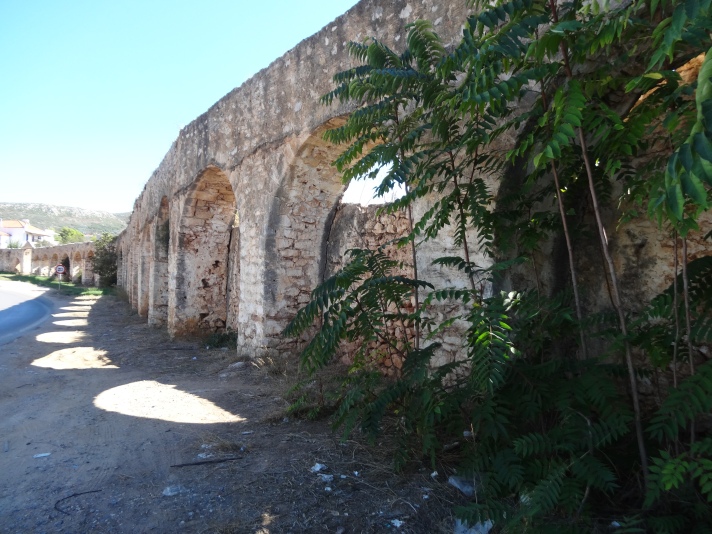 The heat was relieved by a light rain in the afternoon – a novelty in Greece during summer – but a storm brewed up in the evening.

The thunder and lightning continued throughout the night, and at some point I was awoken by a loud bang. That’ll be the electricity, I thought, and tried the bedside lamp. Then the room lights. As I suspected. I unplugged my camera and iPad, which I’d had charging, in case it suddenly came back on, then went back to sleep.

“Ok, but there’ll still be some cold breakfast, even if there’s no tea,” I thought, feeling a mild panic begin to rise. Have I mentioned my tea addiction? I need tea, especially in the mornings.

As I entered, the waitress giggled at my bare feet, then surprised me by handing me my customary large mug! “There’s hot water? But how?” I asked, excited. “Ne, ne (yes,yes),”she smiled, waving generally out the back. “Cars,” she said. Some sort of portable generator, then. How clever. And thank goodness!

Off to … somewhere today. My last night before handing the car back at the airport then back to Athens for my last week. No electricity, so no wifi, so no booking possible. I think I’ll just drive and see where I get to. I’m considering Hotel Saron at Isthmia again; it’s nice, I can have a swim, and the wifi is ubiquitous and strong!

I’m sitting in the breakfast room at Hotel Miramare, Pylos, looking out at the beautiful serene little harbour. There’s a pretty cruise ship anchored and small boats are ferrying back and forward, bringing passengers to tour the town. The horrible boys have gone, and suddenly the wifi, which is only available in public areas, works! I could sit here all day, however there are two castles to look at and I need to move.

I first tackled the Paleocastra (old castle), and in true Greek fashion, cheerfully ignored the sign at the bottom, warning of danger. As I climbed higher, regretting having only one bottle of water with me, my innate caution began to reassert itself. I completely chickened out after about halfway, having managed to get this view of the castle.

The views of the bay on the way back down were lovely – Homer’s “sandy Pylos”, perhaps where Telemachus came ashore to ask Nestor for news of his father, Odysseus. The view from the castle itself must have been spectacular.

On the drive back to Pylos to visit the archaeological museum, I happened across another Mycenaean tholos tomb in a farmer’s olive field. It was undeveloped, but recognisable, and amazingly, just right there! 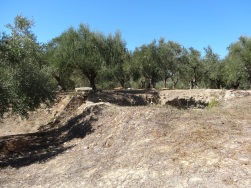 The museum was great, featuring many finds from the Palace of Nestor, which has unfortunately been closed for conservation for some time.  In museums I’m always fascinated with sculptures and paintings from ancient times, knowing that I’m looking at someone who was alive 2000 odd years ago, or in the case of this beauty, even longer.