Slept in this morning and eventually wandered off to the Acropolis Museum, taking the Metro from Monastiraki. During the construction of the Acropolis Metro station southern parts of the ancient and medieval city were unearthed, establishing human habitation from the end of the third millennium BC. Simple houses from the second half of the fourth century were excavated, with wells, sometimes more than one in a house, for drinking water, and underground cisterns to collect rainwater for household needs. Under the whole area is a dense network of clay pipes that carried waste from houses and workshops to underground sewers. Another huge excavation is in progress under the massive entrance of the Acropolis Museum, with a promise that when excavations are complete visitors will be able to walk among the remains of the ancient neighbourhood, while an exhibition of the finds will be mounted in the museum. You can look down from the entrance walk into the excavations.

Another huge excavation is in progress under the massive entrance of the Acropolis Museum, with a promise that when excavations are complete visitors will be able to walk among the remains of the ancient neighbourhood, while an exhibition of the finds will be mounted in the museum. You can look down from the entrance walk into the excavations.

They seem to go quite a way under the museum. It will be great to come back in a year or two.

Inside the entrance is a series of models showing the development of the Acropolis from around 1200 BC, when it was basically a hill, fortified with a Cyclopean wall, similar to those at Mycenae and Tyrins, with the palace in the centre of the plateau, through all stages to the end of the Byzantine era. 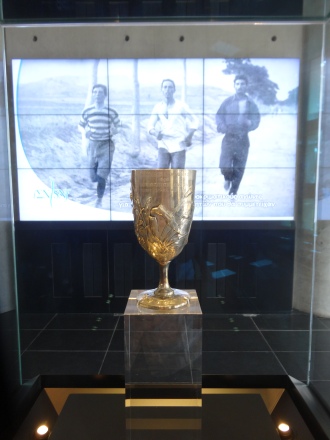 Also here is the silver cup awarded as a prize to Spyros Louis, the winner of the 1896 Marathon, displayed with a fascinating photo of three of the runners. Amazing to compare modern athletes, with their coaches, running shoes, uniforms and bibs, with these runners, probably untrained, barefoot and in their everyday clothes.

Five of the six Karyatides are housed in the museum, where they’re sheltered from the depredations of weather and pollution. The sixth of course is in the British Museum, where it’s been since its theft by Lord Elgin. Those we see on the Acropolis, holding up the porch of the Erechtheion, are copies. One of the five originals was undergoing preservation work, and was modestly hidden inside a sort of fabric dressing room.

It’s great to be able to see them close up, and appreciate the intricate carving of their hair and the draped folds of their robes.

There’s also a beautiful bust of a youthful Alexander, which I love, probably carved from life 340 – 330 BC, which would be around the time that Phillip sent Alexander as his envoy to Athens.

The top floor of the museum replicates the design of the Parthenon, its marble columns replaced by shining steel poles, and the remaining sculptures interspersed with plaster copies of the missing Parthenon marbles, holding their places for when they’re returned.

It’s a brilliant concept, showing just how magnificent it was. Through floor to ceiling windows, you look out to the Acropolis, and the real Parthenon.

I had a late lunch at the museum’s balcony restaurant. Most meals in Greece are enormous, because they’re made for sharing. Lunch however was a potato salad and smoked trout just big enough for one – and delicious. While I ate, I could look up at the Acropolis, and also back at its reflection in those huge windows.

2 thoughts on “The Acropolis Museum”