I bought a box to pack Connal’s hats in this morning. Walked for over an hour the other day looking for one without luck, and 40 minutes this morning, and it turned out after various directions in back streets to be around the corner from the hotel. Less than two minutes to get back and it only cost 50 cents! Bargain!

I also found the walk-over excavations in Monastiraki station. I’d been thinking it was in Omonia, but it’s in Monastiraki, basically my backyard, all the time. I really should have twigged earlier, because there’s a big skylight down to it in Monastiraki Square. To see them you go to the Kifissia platform, where I went today because I was heading to Victoria station to visit the National Archaeological Museum. Yes, that’s my ancient stuff visit for today, to see the museum again, which is fantastic, but to also see the Antikythera Mechanism exhibition, finds from an ancient shipwreck discovered off Antikythera, which Connal and I missed by a month last year.

The mechanism is thought to be a type of computer or calculator – only 2000 odd years old! The workmanship and tools required to make it are extremely advanced. The link above provides loads of information. There are many other finds from the shipwreck, including this larger than life-size arm of a boxer. 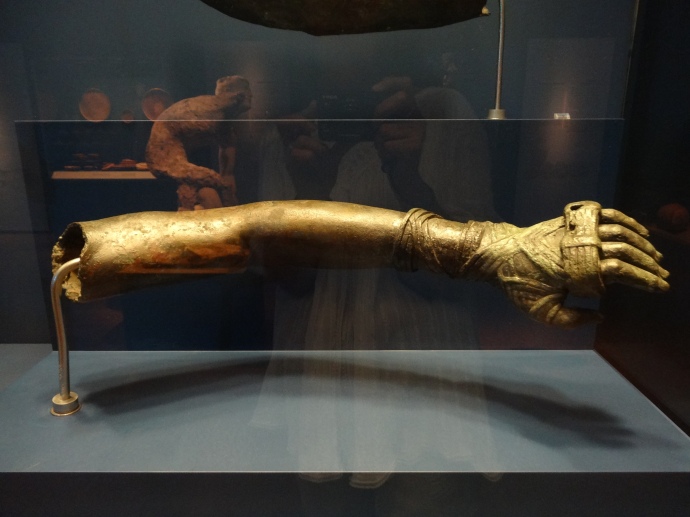 I can only imagine the damage that boxing with this type of wrapping would do to both the boxer and boxed. 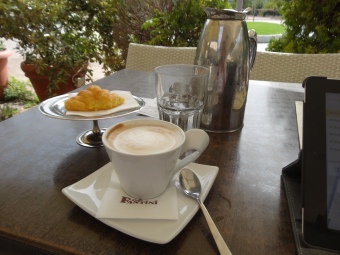 After getting out of the Metro at Victoria, I did my usual trick of turning left instead of right, adding a few blocks to an already considerable walk. (Have I mentioned before that I’m directionally challenged?) Hot, sweaty and a little weary I decided to rest and fortify myself before going into the museum, which, handily on Mondays, is open till 8pm, rather than closing at 3pm as it does the rest of the week. I ordered a cappuccino. The jug of cold water and the croissant are gratis. Another thing I love about Greece – if you order a coffee or tea, it comes to the table with a jug of cold water and a small cake or two.

On my walk down (and up!) 28 October Street earlier, I’d noticed a heavy police presence, complete with riot shields, mostly standing around chatting, and their bus. They were in khaki rather than blue, as was the bus, so perhaps they’re national rather than city police. Whatever they were waiting for must have begun, because the bus just went by, lights blazing and siren wailing. I could sit here all day watching the life of the city, but it’s time I made a move into the museum.

One thought on “Ancient computers and packing hats”