After Pella, I was very much looking forward to Vergina, the ancient royal town of Aegae before Archelaos I moved it to Pella. Aegae remained the traditional burial place of the kings of Macedon. The first thing I noticed on the way that it’s well sign-posted. It looks as though Greece is really keen for people to visit the monuments here.

After arriving in the town, it was still well sign-posted, a detail I’ve noticed is often missing. Often the last sign before actually arriving is at least a kilometre from the site, and even up to five! But Vergina was easy. There was even a sign for parking for the Museum, which is also the site of the great tombs, so I drove in and parked. It was then I realised I’d been had. The parking lot was a private venture, and there was a small inexpertly made sign advising of one euro fifty charge. I didn’t mind though, even though it turned out there’s plenty of on street parking available nearer the museum. Every little bit that goes back into Greek pockets, the better for the economy.

The entrepreneurial gentleman running the parking lot was gesticulating at me that I had to move my car, because the spot I’d chosen was apparently a prime spot for a motor home. Obediently I moved to where he indicated, and shuffled back and forth till he was satisfied. He asked me, “Sprechen sie Deutsch?”. I replied, “Nein,” at which he repeated, “Nein!” and laughed. I paid and off I went, hearing him as I left talking animatedly in German to someone. I think he actually was German.

I walked off down the hill in the direction the sign indicated. As I walked through the gates, I saw the tumulus, 13 metres high and about 100 metres in diameter. 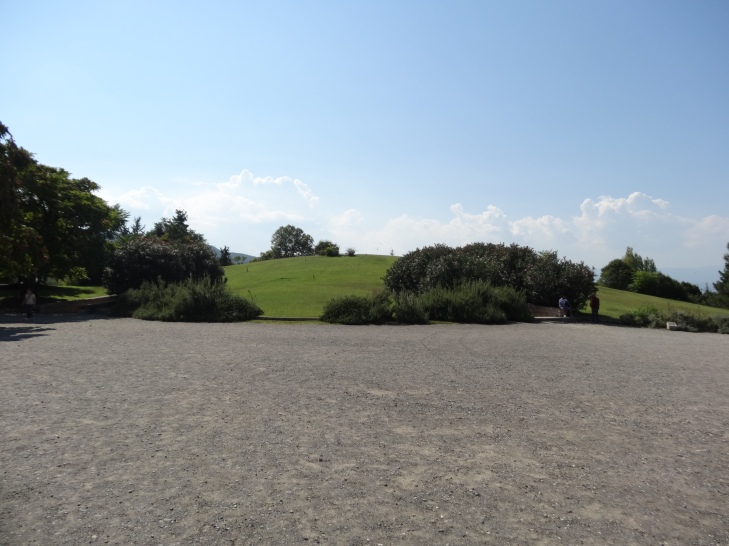 It’s a reconstruction of that which was raised over the tombs sixty years after their creation, after looting by Galatian invaders in 274/3 BC, and which was excavated from 1976-80. The re-constructed tumulus provides a protective shelter over the tombs and monuments. As I walked towards the entrance I saw it was designed to replicate the real thing too, which gave me a slight chill as I prepared to walk through it. 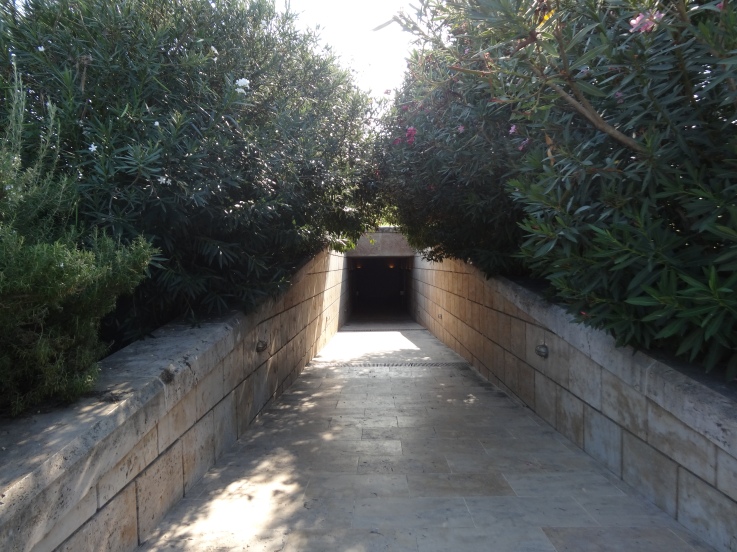 Once inside however, I was quickly brought back to the present by a polite young man telling me sadly but firmly that I couldn’t take photos inside, even without flash. Equally sadly I put the camera back in my bag, and prepared to try to absorb everything I saw. (The pictures I’ve included of inside the tumulus are from the net.)

Inside is dimly lit, the only light coming from the spots perfectly designed to illuminate only the exhibits. It’s very atmospheric. Interestingly it seems to have the desired effect as visitors move quietly and speak in hushed tones if at all. I moved through the exhibits taking my time to examine everything. As well as grave steles, there were replicas of the wall paintings found in the tombs, and grave goods and offerings of many people, ordinary, noble and royal. The collection of the goods that were burned on the pyre of Philip II, father of Alexander, is enormous, especially when you consider that the pieces left over from the flames are only the small metal fastenings, seeds that were somehow protected, small bones of animals that were sacrificed for the funeral and the dead king’s weapons.

An entire room is dedicated to the finds from Philip’s tomb. The image below shows much of it. After his cremation, the bones were cleaned and placed into a gold larnax, decorated with the sixteen rayed-star of the Macedonian royal house, and rows of lily, palette and rosette ornaments. The larnax is displayed surmounted by his grave wreath of gold oak leaves.

And then it was time to go down the stairs to the gate of the tomb.

The faint noises from the floor above faded away as I descended. I stood alone at the bottom of the stairs, surrounded by dark silence, before the massive marble doors, and thought about Alexander being here, possibly on this very spot, burying his father with huge ceremony after his assassination.

I admit to being a bit emotional. There was some trembling, and a few tears.

Over the years I’ve read a lot about Alexander, and while he’s known as Alexander the Great for his enormous and unprecedented accomplishments, I have a great deal of respect for his father Philip’s statesmanship, generalship and kingship.

Another, smaller, tomb was thought to be that of his most recent wife Eurydike (the Macedonians practised multiple marriage for diplomatic reasons), murdered after Philip’s death by Olympia, Alexander’s mother. The information there says however that it was that of an earlier wife, who because of her Thracian heritage and the customs of her race, went willingly to the pyre with her dead husband. The magnificence of the tomb, though short of Philip’s, is said to reflect the honour in which Alexander held her sacrifice.

Another tomb, known as “The Prince’s tomb” is that of a youth aged about 14 years old, said to be King Alexander IV, murdered with his mother Roxanne by the regent, Cassander. I think it was because he was beginning to show qualities like Alexander’s, and quite possibly there were too many of the army very willing to follow the son of Alexander. It’s one of the great unanswered questions for me – what would he have been like, and how would history have been changed had he survived?

After leaving the tumulus, I followed the signs to the ancient theatre, further up the hill. I had been told that it and the palace site were both closed for conservation work, but I wanted at least to have a look through the fence. 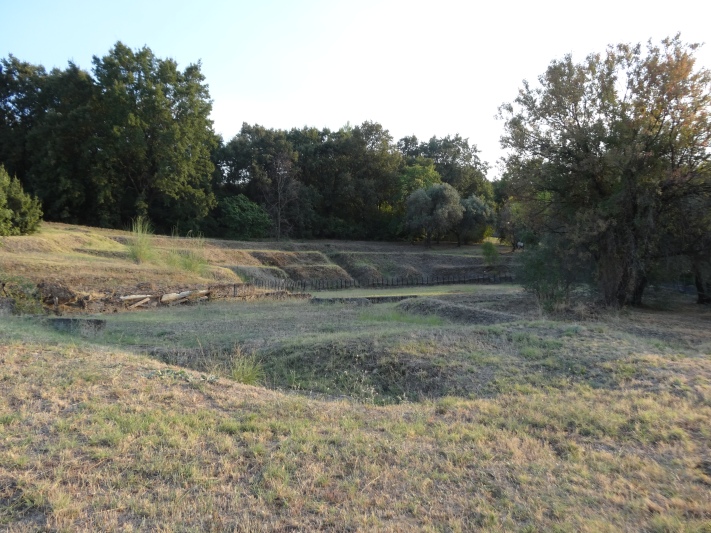 Although there wasn’t much to see, as it’s grass covered and there are only a couple of earthen rows of seats visible, I was glad, in the cool quiet of the early evening, to have added it to my pilgrimage. It was the place where Philip was assassinated, and where Alexander was acclaimed king.