Another quick decision about where to go. This morning I decided to make my way south to Pylos, despite the Mycenaean palace of Nestor being closed till 2015. I hadn’t been there before, there’s plenty to see, including two medieval castles in Pylos itself, and another in Methone, about 20 minutes drives from Pylos, and it has an interesting history. Decision made, I went on-line and booked three nights in Pylos in a waterfront hotel. The internet has made travel so easy now. I tend to use Booking.com because I’ve almost always found a great place with all the features I’ve wanted. There are other sites though that are just as good. I have a friend who uses Air BnB, and has travelled all over France and Italy using it. She’s also used it to find places for us to stay in New Zealand when we go to compete in archery tournaments there. The internet has put the power into our hands, and I love that.

So after having a chat with Alkis at Hotel Pelopsabout Olympia, the Olympic Games and other things, and thanking Mr Spiliopoulis again for his help with the car, I set off southwards to Pylos. There were no further mishaps with the car, and apart from taking the scenic route once or twice when the main road wasn’t obvious, everything went pretty smoothly. As I drove through the town of Kyparissia, I noticed the ruins of a fortress on the hill-top. As I was making pretty good time, I decided to try to turn off and have a look at it. As always when you climb a hill towards an old acropolis, the streets got narrower as I got higher, and at one point I had to reverse down-hill out of a dead-end. There’d been one sign pointing up-hill from the main road but no others and, probably somewhat chastened by my recent car mishaps, I gave up after 20 minutes or so. I managed to get a couple of photos from about half-way up. Apparently the ruins are of a Frankish fortress, but I don’t know any more than that.

It seemed to take ages to get to Pylos from Kyparissa, much longer than the time advised by Google maps. I don’t think Google knows how narrow and windy some of the Greek roads are! Eventually though, I came over a hill and caught sight of beautiful Navarino Bay. I wasn’t prepared for how lovely it is, and despite being very keen by this time to get to my hotel, I stopped at a handy lookout spot and took some photos while drinking in the fabulous view. 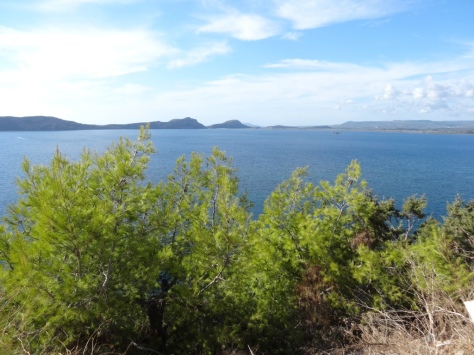 This beautiful peaceful bay was the setting in 1827 for the event that precipitated the end of the 400 year Turkish occupation of Greece, the destruction of the Ottoman fleet by the combined forces of the French, Russian and English commands. Many of the wrecks lie still where they sank. They say they can be seen if you take a boat tour on a clear day.

While gazing, I chatted to a gentleman who told me that he had to take a lot of photos because his wife couldn’t walk so she had to stay in the car. What do you say to something like that? It made me realise how lucky I am, and how grateful I am. I got back into the car and continued down the hill toward the town of Pylos. I’d taken a screen shot of the satellite map before leaving this morning, so as I drove into town, I was able to head straight along the waterfront and find the hotel immediately. My room was really cute with a balcony 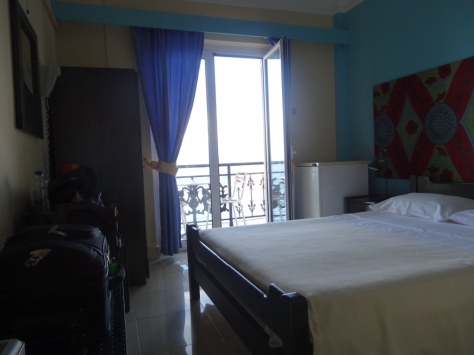 overlooking the tiny handkerchief of beach, and the harbour.

It’s a great feeling to come into a pleasant room after a long wearying drive. I settled in, feeling very relaxed, and looked for a power point to recharge my phone, camera and iPad. Suddenly not so relaxed! I found one on either side of the bed, for the bed lamps, and one for the TV. The problem was that the plates of all three had been lifted and were hanging off the wall with the wiring exposed, and each of them had a couple of appliances, lamp and phone, lamp and fridge, TV and air-con, jerry rigged directly into the wiring behind the plate. It’s possible if I’d plugged my chargers into them that the power points would have worked, but frankly, I wasn’t about to touch them! One of the things I love about Greece is that the people have a real can-do attitude and make pretty much anything work. In this particular case though, I would have preferred the usual method of using power points. I continued my search. No luck in the bathroom. I finally found one that looked safe to use, possibly because it never had been, on the wall at the side of the wardrobe. The adapter and chargers wouldn’t fit between the wall and the wardrobe, so I put my back into it and shifted the wardrobe a few inches sideways. Success! Appliances plugged in and charging!

I went to ask the receptionist for the wifi password and found that wifi was only available in the public areas, which included the breakfast room, open all hours, food only at breakfast time, and the bar, open all hours, no food. I went out to dinner at a waterfront taverna where I ordered before finding out that they didn’t have wifi. I think it was the only taverna or cafe in Pylos without it, because I found later that it was pretty much ubiquitous. I read my book instead, “A dance with dragons” by George R. R. Martin. (Love the Game of Thrones series!) To begin, I ordered grilled mushrooms. They neither looked nor tasted as I expected, and while tasting interesting, and not unpleasant, they weren’t a favourite.

A coach load of 50 German teenage boys arrived that evening, and totally monopolised the available bandwidth, so neither I nor the receptionist could use the wifi. The internet empowers us in all sorts of ways, but we can become extremely dependent on it. And I don’t half get the irrits when I don’t have it!